Arkansas-Oklahoma Preview: The Game Without Defense

Share All sharing options for: Arkansas-Oklahoma Preview: The Game Without Defense

At 7PM tonight, the Oklahoma Sooners (3-3) try to build a winning streak after winning their last time out against Nichols State. The Sooners are a perfect 2-0 at home so far, and have averaged a 17.5 point victory in the Lloyd Noble Center. They will be hosting the Arkansas Razorbacks (2-4) who have yet to play a true road game, and who are coming off three straight losses at home to mediocre opponents - Morgan State, East Tennessee State, and Alabama State.

From indications in interviews, it seems as though Willie Warren will manage to crack the lineup again, after he was either in the doghouse or ill the last time out against Nichols State. More of the preview, after the jump.

Obviously, one of the guys the Sooners need to focus on locking down is Rotnei Clark, a 6-0 shooting guard who scores a lot for the Razorbacks. From the OU Athletics website:

He has made 35 3-pointers (5.8 per game) and is shooting .574 from behind the arc.  Clarke hit an SEC-record 13 treys against Alcorn State and scored a school-record 51 points. 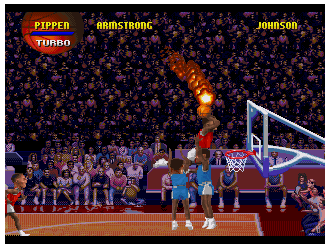 According to Statsheet.com, Clarke plays about 93% of the minutes for his team and he is the most efficient offensive player in the country at 1.43 points per possession (PPP). He is also number one nationally in effective field goal percentage, field goals made, 3-point field goals made, points per game, and 3-point field goal percentage. He doesn't just shoot well, but he gets a high volume of shots. If the Sooners are going to succeed tonight, they may well need to double team Clarke and make the rest of the team beat them.

To the right, Clarke is "on fire" this season...

Arkansas has a very high defensive FTA/FGA ratio, which basically means they give up an extraordinarily high amount of free throws for every field goal attempt by the other team. Usually this occurs with teams that play leaky defense, and allow guys to get to the rim fairly easily.

This makes Willie Warren vital in this matchup. Willie needs to put the ball on the floor and attack the rim, and get their guys in foul trouble. He's really the only guy on the team that can do that with ease. Crocker does an okay job, but the burden will mainly fall on Willie's shoulders. Cade is a jump shooter. Pledger so far has shown no inclination to be anything but a jump shooter.

The KenPom analysis page for the Razorbacks says they play mostly man. While they allow opponents to shoot a high percentage from 3-point range, they tend to keep opponents from shooting from 3-point range often. This tells me that they probably play a somewhat aggressive defense, but can get beat on dribble-drive penetration. Tommy Mason-Griffin and Willie Warren will need to attack the basket and hang on to the ball, and then possibly kick it out to shooters.

The other place the Razorbacks can be beat is on the offensive glass. They are, quite frankly, not adept at getting offensive rebounds when they are on offense, and they yield a pretty high percentage to the other team. With some talented scorers playing for Arkansas, OU will need to make sure they limit second chance points.

This is a game the Sooners should not lose. Arkansas has lost 4 of their last 5, even with Clarke lighting it up, and  they lost their last three in a row! At home! Time for the Sooners to lock it down on defense and get some momentum into the Arizona game.