There's lots of interesting basketball statistics being developed these days to determine the value of players to their basketball team, similar to WARP in in baseball, or DVOA in football, and I figured I would take a look at it since the regression was easily available.

The one measure that I found that I really like is statistical plus-minus. What is it? Basically it is the number of points that a player would add to a team if that player replaced an "average player", over 100 possessions. It is based on tempo neutral statistics (averaged for "per 40 minute production"). It accounts for things like turnovers hurting a team, and things like assists and steals helping a team.

Here's a good post on the topic on 82games.com (an NBA website), if you feel like becoming a stat nerd. I used this updated regression from basketball-reference.com to calculate the values for the Sooner basketball team over the entire season so far. Players with less than 40 minutes logged were not included.

Follow the link to see the results, posted in a table after the jump. The results are very interesting, and somewhat surprising, unless maybe you've watched all the games so far with a keen eye to what's been going on.

What are you looking at in the above picture? Well all of the statistics are basically used in the calculation of the statistical plus-minus. The second column from the right, titled "SPM", is the actual value. Boxes shaded in green indicate that player positively contributed to the Sooners' efforts over the season. The thick horizontal line shows the cutoff between the positives and the negatives. The column on the far right is the theoretical amount of points added by a player greater than an "average player", on a per game basis (based on the Sooners' current 66 possessions/game clip).

You can see that Willie Warren has clearly been the most productive player, and he has probably added the most value to the team's efforts so far. However, Steven Pledger, Cade Davis, and Tiny Gallon all have positive statistical +/- figures. Tiny appears to get the slightly positive values because of his significant rebounding contributions, and the large offensive rebound figures. Pledger doesn't do much in the stat box other than shoot, but he does that pretty well, which has made him the second most productive Sooner so far. 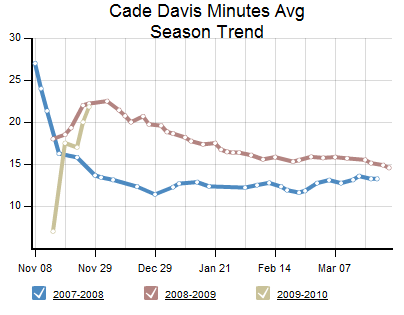 If you haven't been watching closely, Cade Davis' +3.62 SPM figure might be a bit shocking to you. It's good for third on the team. But Cade has been giving a lot of effort this season - "doing a lot of things that don't show up in the stat sheet". He also fills out a lot of the hustle statistics well, limiting turnovers, getting steals, and crashing the boards. Capel has started Cade Davis the past several games, and for good reason.

As you can see on the graph to the right, from Statsheet.com, Cade Davis experienced a peak in his minutes per game average right around this time of year last year, before Capel started whittling down his rotation. He's seen quite a boost in playing time in Alaska, and as the Sooners return home for a game against Arkansas on Wednesday, one can't help but hope that Capel allows Cade to continue to see more minutes. One thing more than anything else, Cade tries hard. He gets the hustle plays that a team needs, and it seems like we always make runs with him on the floor.

As far as the negative end of things go, a couple things stand out like sore thumbs. First, Tommy Mason-Griffin has logged the most minutes on the floor of anyone on the team, and yet his SPM figure (-9.43) is good for second worst of any of the rotation players. It probably has a lot to do with the fact that he's a freshman point guard, and typically freshman will struggle in this regard (adjusting to D1 basketball). However, if this is the case, he can't continue to log the most minutes on the team. Willie needs to run the point and Mason-Griffin can still get about 20-25 minutes off the bench. The SPM figures suggest a lineup of Willie at point, Pledger at shooting guard, Cade at another guard position, Crocker as a SG/SF, and Tiny Gallon as the center. This would be a somewhat small lineup, but it would probably allow for the most productivity until all of the freshman can adjust.

The other thing that stands out is Ryan Wright's woeful -10.43 SPM figure, by far the worst on the team. I don't know what it is, but I never seem to notice him do anything out on the floor, other than when guys blow by him for easy baskets. We started to see it in the last few games, but expect Orlando Allen to start to get more minutes as a sub in the post, along with Fitzgerald.