With a 1-5 record away from home thus far this year, and a 5-0 record within the friendly confines of Gaylor Family Oklahoma Memorial Stadium, one wouldn't be terribly surprised to learn that the Sooners have some pretty severe home-road splits.

It's been very difficult to explain exactly why that is. The offense is under the guidance of redshirt freshman Landry Jones, who just isn't accustomed to playing in a hostile environment yet. He seems to get flustered more easily on the road. At home, though, Jones has even set some school records through the air.

However, even the defense has fallen victim to the road woes. One only has to look to the last game where Texas Tech had the ball for over 37 minutes and shredded the Sooners for 549 yards. 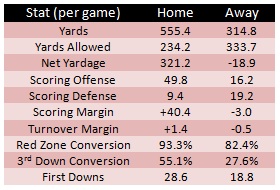 Thus, the splits provided to the left shouldn't be too surprising, but they really are. The Sooners outgain opponents by 321 yards at home, but then get outgained on the road!

Luckily, the Sooners don't need to worry about road woes this week as they host the Cowboys from Oklahoma State. This will only be OSU's fourth game on the road all season. Their previous games - against Iowa State, Baylor, and Texas A&M - were not exactly "tests". The average ranking of those three teams, using Football Outsider's rankings was 83rd (out of 120 FBS teams). The toughest game was probably against #54 Texas A&M.

I don't know if any other top team has had such an easy schedule away from home. As a matter of fact, Oklahoma State fares poorly in the FO rankings because of their poor strength-of-schedule (92nd nationally, or 29th easiest).