So, Are We Allowed To Boo?

Share All sharing options for: So, Are We Allowed To Boo? 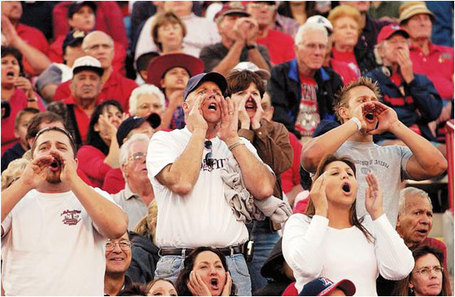 Would booing (like these fans are doing?) be tasteless?

Are we allowed to boo? Because this has been one of the most pathetic performances by any sports team I've rooted for. Ever. Like in my lifetime. My entire lifetime. Spanning all sports.

I don't think I've seen a collection of such talented players try less hard. Ever.

What could possibly motivate them? When they return to the LNC, will they be booed? I suppose it depends on whether they turn in another stinker against Houston, but this has been a terrible excuse for a basketball team. Like a friend told me, it looks like a bunch of guys who got together to play at the Y, not a collection of talented D-1 basketball players and 3 McDonald's All Americans.

I'm on the verge of just turning off the TV for the year. It sickens me to see people in the crimson and cream put forth no effort at all.

Anyways, thoughts on the terrible game - fire away!