It took a little more than three quarters last night but Missouri's Blaine Gabbert finally succumbed to the relentless pressure of the Nebraska defense. Of course it would have happened a lot sooner than that had Nebraska defenders been able intercept passes that were thrown directly to them instead of letting them bounce right off their chests. It times it looked as if Gabbert was begging to get intercepted.

The Huskers 27-12 win in Columbia is directly linked to two issues, the mental collapse of Missouri's quarterback and the physical collapse of Missouri's defense. It truly was a display of ugly football. Yes, the weather elements contributed to it but neither quarterback completed more than 45% of their passes (Z. Lee 42.4%, B. Gabbert 39.5%), and yet somehow Zac Lee was able to torch the Tiger defense for 3 fourth quarter touchdowns.

It was also a significant game for the North as there appears to be a changing of the guard. Missouri has been the team to represent the North in the Big 12 Championship the last two seasons and at least for now they're on the outside looking in. It is a long season though and the Tigers still have plenty of time to get help from within the conference.

The Cowboys suffered a crushing blow in the loss of Dez Bryant this week and still may not have running back Kendall Hunter available. Fortunately for them they are playing a Texas A&M defense that is next to last in the conference when it comes to points and yards allowed per game. I still like o-state to win this game but the loss of Bryant will make it much closer because the Cowboys will have their own struggles on defense as well and may lack the firepower to respond every time.

I don't see any chance of the Cyclones picking up a conference win here. I do see them staying in the game though. No...no, I don't. Unless you are a Jayhawk or a Cyclone there is no need to tune in to this one. 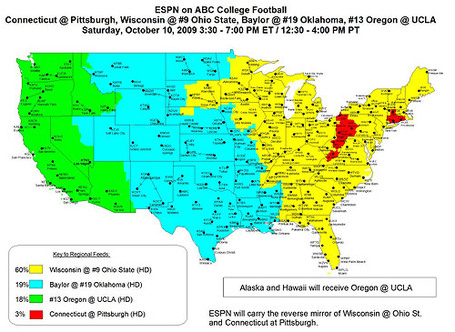 We'll continue to talk in depth about this one leading up to, during and after the game. The open game thread will be up an hour before kickoff.

These two teams may be closer to one another than you think and yes that is taking into consideration that Kansas State is a bad football team. The Wildcats are last in the conference in scoring offense while the Red Raiders are 4th, conversely though Kansas State is 5th in scoring defense while the Red Raiders are 9th. I think Tech wins but not necessarily in blowout fashion. Another thing to note here is that Steven Sheffield could be starting at quarterback for Texas Tech which may not be a bad thing considering that he moved the offense better than Taylor Potts did last week.

There is absolutely no chance for an upset here. Colorado is playing on the road and could very well be the worst team in the Big 12. Texas will smash another bad team and then beat their chests like they've accomplished something.

We all remember what happened to the Gators against the Rebels last season. Could it be Bama's turn now? Mississippi needs this game to stay alive in the Western division after dropping their conference opener at South Carolina.

Tim Tebow or not this is going to be a good game. The Tigers will have to win on offense and if the holy one does play look for him to get hit on just about every play as the Tigers have no problems going for blood early.