This week's roundtable is being hosted by our friends at Corn Nation. In this week's conversation we rank the conferences, discuss the Sooners and compare New York to Shreveport. As always your input is welcomed and make sure to tune back in this evening or in the morning to see the recap at Corn Nation.

With the OU/Texas game just around the corner and then trips to Kansas, Nebraska and Texas Tech looming I think that we have to assume that Oklahoma is going to drop a few more games this season.

Obviously there is still a chance that the Sooners could play in a BCS bowl if they win the conference but the realm of reality is telling us something different right now. Until the Sooners prove that they can block, catch, cover and tackle the more realistic possibility, for right now, is OU ending up in the Cotton or Holiday Bowl. 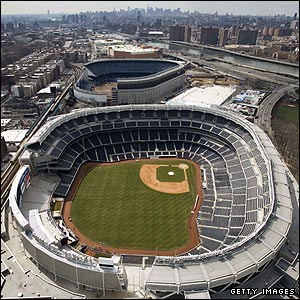 How Can This Not Be A Better Option?

Have you ever been to Shreveport? There's no way that this isn't a good move for the Big 12. I just wish that it was for the 3rd or 4th place team instead of the 7th. As it is we are rewarding the team that just barely finishes ahead of Baylor in the South or Iowa State in Colorado in the North with a trip to Yankee Stadium in New York City.

In year's past that team has gotten what they deserved for barely qualifying to make it to a postseason game. Now why the second place team is in Dallas and the other teams that finished ahead of 7th in the conference are bound for San Diego, Jacksonville, San Antonio and possibly even Boise this team and their fans are rewarded with New York City.

The options for fans and experience for players in New York, as well as the publicity for the conference, will be unrivaled. Especially when you consider that this is replacing Shreveport.

3.  Oklahoma is now 2-2, with one of those victories coming against a winless 1-AA team.  Will all be well in Soonerland once Sam Bradford returns?

It depends on what your definition of, "all is well" is. Will the Sooners become a BCS championship caliber team with Bradford back? No! It's questionable if they can even rise to the caliber of a Big 12 Champion. OU's problems go beyond Bradford. The receiving corps struggles to catch passes, the offensive line struggles to hold blocks and pick up blitzes and the linebackers are struggling in coverage.

Sam Bradford's return means that the Sooners have their Heisman quarterback and the experience and leadership of a two-year starter. Unfortunately I'm not sure that will be enough at this point.

4.  This week, Missouri and Nebraska face off on an ESPN Thursday night broadcast at 8 pm.  Last Thursday, Colorado lost to West Virginia.  Missouri and Colorado both have played Friday night road games.  What's your take on non-Saturday games?

As a guy who starts going through college football withdraws on Sunday morning I love the weeknight games. Last night I watch Middle Tennessee State and Troy, which was a painful display for football.

Having Colorado, Missouri and now Nebraska involved in these games just gives me more of a vested interested. This is a huge game also as the winner will have the inside track to the North Division championship because they control their own destiny. When I can't wait until Saturday these games give me the "fix" that I need and a game of this magnitude is icing on the cake to me.

How much has Dan Hawkins stock dropped? That dude makes the stock market plunge look slow and gradual. With the resurgence of Nebraska, the steady rise of Kansas and the maintenance of Missouri the upper North is distancing itself from the lower.

Yes, Kansas State, Iowa State and Colorado are the three worst teams in the conference. Even without Robert Griffin Baylor would finish ahead of these guys if they played in the North. I don't know that all is hopeless though. Colorado has the glory days of a national championship to look back on, Kansas State will always have the 2003 season as a measuring stick and Iowa State...well...um...maybe there is one case of hopelessness.

6.  Rank all of the division 1 football conferences from top to bottom.  Not just the BCS conferences (ACC, Big 12, Big 10/11, Big East, Pac 10, SEC), but the others (MAC, Conference USA, WAC, Mountain West, Sun Belt) as well.  Who's the strongest conference, and who's the pretender?

7.  PowerPoll time.  Rank 'em 1 to 12 based on who you think would be the victor on a neutral field.