Did You Get That Memo?

Share All sharing options for: Did You Get That Memo?

To put it bluntly, I think that only a cocky guy playing NCAA Football on his X-Box as some highly rated team would seriously consider calling a draw play on 3rd down and long. And that's a maybe. I don't know for sure. I haven't seen many people call a draw play on 3rd and long in a competitive game, much less 3 or 4 like Kevin Wilson settled on for the OU-Miami game.

It is absolutely ludicrous to expect your team to convert a first down, when they have to go about 11 yards, by having your quarterback pause for a couple of seconds and then hand the ball off. Miami would have had to have an utter defensive collapse in order to fall for that one. Sure, this strategy might work against Idaho State, but it won't against a resurgent Hurricane squad.

Oh, but we don't have Sam Bradford you say? The Heisman Trophy winner is out, so we better not pass. Too bad that his replacement set a school record for touchdown passes two weeks ago, and he tied the NCAA freshman record for passing touchdowns in a game. Landry Jones can throw the ball. He proved that on the first touchdown drive.

So here's the deal: either admit that you're going to call an ultra-conservative, mind-numbingly awful game without your Heisman Trophy winner in at quarterback, or stop saying that it's as simple as plugging in one quarterback for the other.

I have to admit, the draw plays were what ate at me the most, but we left points on the field in other ways too. Like when we had the ball with 4:08 left to go in the first half. In the first seven plays of that drive, Kevin Wilson dialed up running plays five times. The offense showed no sense of urgency. After driving down to the Miami 42 yard line, we were faced with a 2nd and 10 with not much time remaining in the half. Wilson again dials up the run, even though we have at least 10 yards to go to get into field goal range, AND we were quickly running out of time. Murray lost 2 yards on that play. The drive stalled, and we walked away empty handed. The most agonizing part: we went into the locker room with 2 timeouts! We had two timeouts that we didn't use! That is INEXCUSABLE.

For as often as I hear the phrase "Choke-lahoma", I always dismissed it as petty teasing by other fans. But, I have to admit, I'm starting to believe it. When was the last time we won a game that was decided by less than a touchdown (6 points or less) away from the confines of Owen Field? November 25, 2006. We barely beat Oklahoma State in a Bedlam matchup in Stillwater after a pass in the final seconds glanced off a Oklahoma State receiver's hands. The point is, more often than not, in the big games, we come up short. And it's happening with disturbing frequency.

This doesn't bode well for these remaining games on the schedule this year: vs Texas, at Kansas, at Nebraska. 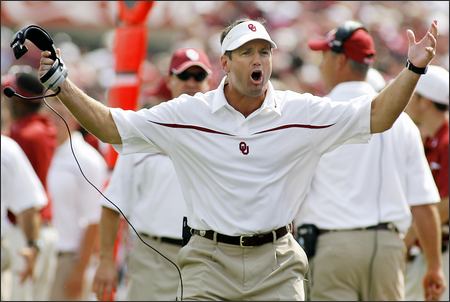 You can cite all the offensive records that we broke last year, I don't care. If you look at our last three collective losses, a big failing point has been the lack of imagination in offensive play-calling. Against Florida, we were doomed by two goal line stands by the Gators, as we tried to run off-tackle runs against one of the fastest linebacking corps in the country. Add to that the whole short-passes-and-lots-of-running routine and the "NCAA's Most Prolific Offense" was doomed. Against BYU, we had the same problem - even when Sam was in the game. No passes beyond 10 yards. Lots of run plays, even where they didn't make sense, and screen passes galore.

It seems to me that defensive coordinators aren't dumb, and they can figure it out if you keep running the same play. Against inferior opponents, the talent gap makes it so it doesn't matter. However, in the "big games", we always seem to come up short, and a big reason why is because the other team always knows what's coming.

Sooner fans are understandably frustrated that OU can never win the big game. It hasn't happened in awhile. The last bowl game we won was in 2005 and that wasn't a "big game". I saw a post on the "SoonerFans" message board and I think it pretty much sums up the minds of Sooner fans:

What got me most of all was that I expected us to lose when we were only down 4 with 8:50 to go in the game. Most teams I watch, I think man, all they need is 1 TD and a good stop or two. But watching us, I just didn't think we'd score another TD. And we didn't. Thanks KW for destroying my faith in our O to score a touchdown on the #17 ranked team in the country.

This poster is absolutely right. Did anyone have confidence that we would go down and score, and then be able to stop Miami? When was the last time you felt confident that OU would be able to drive down for the winning score? My guess is that your answers to those questions will be an indictment of our offensive play-calling.

You can try and blame our two losses this year on injuries. But I'm not going to let you get away with it. Landry Jones is young, sure, and he has a lot to learn. But even right now he's still an above average quarterback. Sure Bradford was knocked out, and a couple of our receiving weapons are down. But this is the University of Oklahoma football team. We recruit good players. And we didn't get blown out in either game. There were a number of drives that probably would have had a different outcome if Kevin Wilson decided to open up the playbook instead of playing ultra-conservative.