Share All sharing options for: Seven Keys To Beating Texas 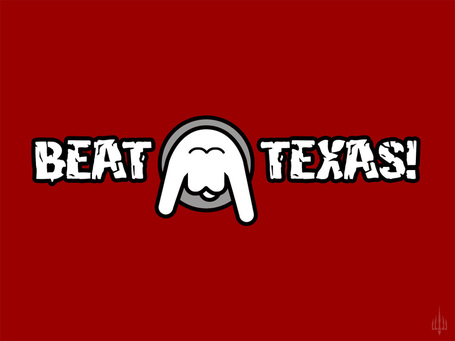 There are two things that we've learned from watching the Texas Longhorns play football this season. 1) They're really good! Their 47.2 pts per game is tops in the nation and their15 pts allowed is 15th in the nation. 2) They're not unbeatable! At times the Longhorns have looked very average and it was against lesser opponents. Wyoming, Texas Tech and Colorado are all teams that have held leads on Texas this season. They are also teams that have shown us a pattern to beating the top team in the Big 12. If Oklahoma can introduce the right ingredients into today's game at the Cotton Bowl they can walk out as the first team to beat the Longhorns this season.

This may be the easiest step in this whole process, especially if Tre' Newton and Vondrell McGee aren't playing. By shutting down the Longhorn rushing attack the Sooners will force Texas to try and move the ball through the air which has been their strength but it is also the key to victory, by a very slim margin. Colt McCoy has tossed six interceptions so far this season and if he has to throw out of necessity and under pressure then Oklahoma might just pick up a few extra possessions.

2. Pressure And Contain Colt McCoy With The Front Four

This is huge! If Oklahoma's defensive line can get consistent penetration and disrupt things in the backfield then that's a huge plus. However, if Colt McCoy is able to elude the pressure and make a throw or even scramble then he'll hurt the Sooners. For that reason its imperative that OU's defensive ends not only pressure McCoy but that they also not allow him to get wide of them and move up the sideline.

With 47 receptions for 583 yards there's no mistaking who Colt McCoy's favorite target is. Oklahoma must account for Shipley on every down and blanket him so that McCoy is forced to find another target or better yet pause while looking down field. Dan Buckner and James Kirkendoll are good receivers but they're not in the same game breaking mold as Shipley. McCoy has gone to Kirkendoll 30 less times than he has Shipley and if he can beat the Sooners by going that way instead of to #8 then he's truly earned it.

It can't be stated enough that Oklahoma must run the football to win this game. Pounding the ball with success will do several things in this game. It'll wear down the defensive line, eat the clock and set up the passing game. Chris Brown and DeMarco Murray are averaging 4.7 and 5.3 yards per carry and will be called upon to set the pace for the OU offense.

This could be the understatement of the year! Bradford must have time to set up in the pocket and find his receivers. Look for Oklahoma to start off with several varieties of quick passes to test the waters before stretching the field.

We've reached the point of the season where false starts and illegal motion penalties should be nonexistent. Oklahoma can't afford to put themselves in 1st and 15 type positions. Texas is going to be ultra aggressive on defense and any opportunity to pin their ears back and come after Bradford is going to be a "hold your breath" type situation.

Texas Tech passed for 420 yards against the Longhorns. Oklahoma will be more balanced in that they'll try to run the ball more than Tech did but the point here is that you can pass the ball against this Texas secondary just as long as you are able to catch the ball. The drops we saw last Saturday and have seen all season long for that matter just won't work today.

My opinion is that this will be a defensive game and turnovers along with field position is going to be at a premium. Oklahoma has a legitimate shot at winning this game but is isn't going to come easy and they are going to need to catch a few breaks in the process.