Odds and Ends For The OU-Miami Showdown

Share All sharing options for: Odds and Ends For The OU-Miami Showdown

While I'm sure everyone is still scratching their head over why College Gameday would travel to the Boston College - Florida State game when there are two far more obvious choices (OU-Miami, USC-Cal), it turns out that Kirk Herbstreit and Brent Musburger will still be calling the Sooners game. Lisa Salters will be the sideline reporter. This, of course, means that Herbie will need to be flown down to Miami immediately after Gameday. Busy day for him! Meanwhile, we get the benefit of being able to listen to ESPN's "A-Team" of announcers. Additionally, most of the country will be seeing our game, so a good performance could mean a jump in the polls (for either team really). 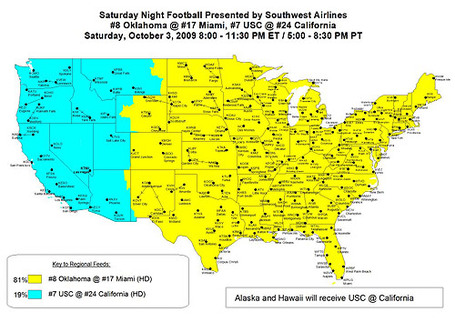 More odds and ends will be posted after the jump, including some brief news about various things, and a somewhat rainy weather forecast.