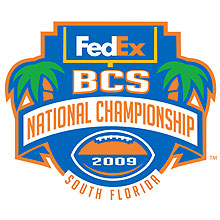 It seems that the majority of the pundits (and even the general public for that matter) are picking the Florida Gators to win this games based solely on OU’s defensive stats. While I’m not one to stand up and proclaim the Sooners as the best defense in the land I will hold fast to the belief that the quality of the Big 12 offenses had a lot to with the points per game that the Sooners are surrendering. When you look at the fact that played against seven of the nation’s Top 25 scoring offenses with a combined average of 39.9 points scored per game then OU’s average of 24.5 points allowed becomes a lot more respectable.

On the other hand short of there hasn’t been an offense more prolific than ’s in college football this year. The Gators run a glorified veer offense and are third in the nation in points scored per game (45.2) with 442.4 yards per game. They rush for 229.8 yards per game (9th in the country) and have scored 41 of their 72 offensive touchdowns on the ground. The passing attack lacks the punch that their rushing attack does but is still potent none the less. The Gators pass for an average of 212.6 yards per game and have scored 31 touchdowns through the air. Teams of note that have posted more yards through the air than Florida are Oklahoma State, North Texas, Arizona, San Diego State, Iowa State, Texas A&M and several others. In fact, there are 47 teams that posted better numbers through the air than the Gators. Obviously that makes the game plan crystal clear for Brent Venables and the defense.

How ’s Defense Can Slow The Offense

Note that I said, “slow the Florida Offense” and not stop it. The truth is, the Gators are going to score. I’m going to go ahead and say that this game has no chance of finishing 13-2 like the 2001 Orange Bowl did. However, there are some things the Sooners can do to slow ’s offense and put them in position to win.

* Contain Tebow – The Gators go as Tim Tebow goes. must follow the game plan and make him a non-factor in the rushing game. In that game Tebow ran the ball 15 times for 7 yards.

* Account for the Backfield – No one in the country has a stable of backs like the Gators do. While failed to produce a 1,000 yards rusher they did have four guys (including Tebow) run for over 500 yards. The backs are also dangerous in the passing game as well because they are fast. Each one of these guys should be accounted for in order to be contained. For to do that they must play assignment football and play it very well. A blown defensive assignment for in this game is going to result in points for .

*Win First Down – First down is going to be huge in this match up. Ultimately the Sooners are going to have to force the Gators to pass (We’ll get to that in a minute) and limiting them to short yardage is the key. By forcing the Gators into 2nd & 3rd and long OU will limit what they are able to do with their rushing attack.

*Force Tebow to Pass – Tim Tebow doesn’t turn the ball over very often nor does he make many mistakes. However, the times that he does are when there is pressure coming on him. fans need to be aware of the fact that the Gators have a very legitimate chance of winning this game. What the defense will do is play to stop the run and make Tebow beat them through the air. It is a known fact that the Gators are worried about OU’s fast paced, no-huddle offense and in order to counter that they are most likely going to attempt to eat up the clock with their rushing attack. Take away the rushing attack and force the 48th ranked passing offense to beat you is the best option for the Sooners.