Share All sharing options for: Breaking Down Bedlam – Sooners 89, Cowboys 81 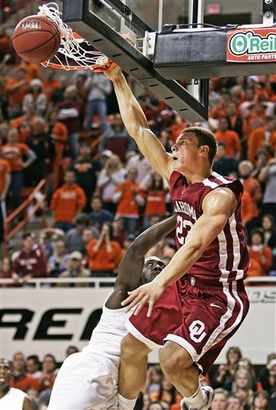 ’s Blake Griffin and Austin Johnson were the difference makers in last night’s Bedlam basketball game in . O-State did everything in their power to turn it into a Bedlam brawl with cheap and classless fouls early on but it was to no avail as the Sooners proved to be too poised and even too tough to fall into that trap. What OSU learned was that you can’t bring a physical game against the Sooners when you have a finesse team. When the Cowboys quit trying to intimidate OU and went on playing their brand of basketball, which focuses on efficient passing to create outside shots, they made a game of it.

’s initial game plan was to double and even triple team Blake Griffin in order to force to beat them with someone else. Austin Johnson quickly forced the Cowboys away from that plan by showing that he was more than capable of making O-State pay for focusing only on the inside. What happened next was a thing of beauty. Because of Johnson’s hot hand OSU had to pay more attention to the guards leaving Blake Griffin room to create havoc under the boards. single-handedly beat the Cowboys on the boards (19 to 16) and scored a game high 26 points in leading the Sooners to their fourth consecutive Bedlam basketball win with an 89-81 victory.

O-State made their spurts with streaky shooting that was more indicative of great Cowboy shooting at times than it was of poor Sooner defense. In the end it wasn’t enough though as the Sooners held OSU to 46% from the floor.