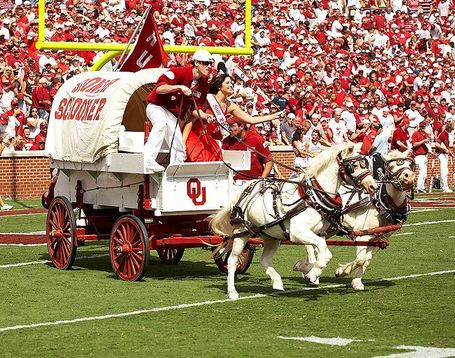 There had been a lot of talk about who would fill OU's schedule next season. Would it be another mid major team? Sadly no, and sadly it is another FCS team. The Idaho St. Bengals became the Sooners 12th opponent next season and fills out what should be a very impressive, minus that game, schedule next season. The Sooners take on 8 teams from bowls last season, 3 of those teams being non-conference teams, and even play the first football game in Jerry Jones' new ginormous stadium in Arlington.

The entire schedule is after the jump.

Some of my thoughts on this schedule is that even though we have another FCS team on the schedule, the road game at Miami and "nuetral" site game versus BYU and home game against Tulsa more than make up for having to plug in a terrible FCS team. The conference schedule is as tough as it will always be with the toughest games being of course against Texas, at Nebraska, and the Bedlam game should be one of the more competitive games we have at home all year.

The Miami game had to be moved to the first week of October due to a scheduling conflict at Dolphins Stadium.

AD Joe Castiigilone had this prepared statement after the official announcement of the schedule.

"Working in concert with our coach, Bob Stoops, we are pleased with the quality of our non-conference schedule and feel fortunate to adhere to our core scheduling philosophy in preparing our team for a rigorous conference slate," Oklahoma athletic director Joe Castiglione said in a prepared statement.

"It took a considerable amount of cooperation between Oklahoma and Miami to maintain that game, but the two schools were able to work together to keep it on the schedule."

I am very glad that the Miami game is still on because that will be a big game next season as Miami really rounded into form at the end of the year.

So have it, what do you think of the schedule? What games will be the toughest? Any trap games? Will it help having a much tougher (on paper) schedule than some of the other National Title contendors?