Huskers Give Sooners A Wakeup Call

Share All sharing options for: Huskers Give Sooners A Wakeup Call 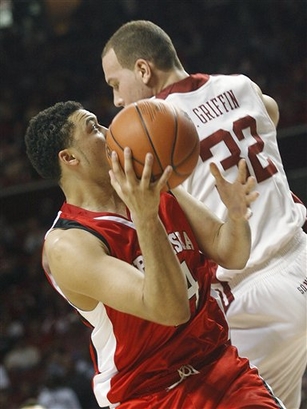 Jeff Capel has brought the OU men’s basketball program to new heights but even with their #5/6 ranking the Sooners learned that they aren’t good enough to sleep walk on teams in the Big 12 Conference. Playing scrappy defense and shoot three point shots at an alarming pace the Nebraska Cornhuskers built a first half lead of as many as 7 points at one time and led 38-32 at the intermission.

Apparently the alarm clock went off at halftime as OU unleashed the beast by feeding the ball to Blake Griffin and outscored the Huskers 40-23 over the final 20 minutes of the game in route to a 72-61 win. finished with 27 points, 18 rebounds and also swatted 3 shots. He was followed by Austin Johnson, who continues to impress in conference play, with 15 points, 3 rebounds and 5 assists. Tony Crocker also had 5 dishes to go along with his 12 points making him ’s third player to score in double figures.

fell into ’s trap early by not being patient and settling for long distance shots rather than trying to work the ball inside to Blake Griffin. Meanwhile was hot early allowing them to build a lead but the story would be much different in the second half. ’s defense, pesky in the first half, couldn’t come up with an answer for in the second half while OU was able to cool off the Husker’s hot shooting with a stifling defense of their own.

I’ve been critical of ’s free throw shooting all season long and while 62% (13-21) could have gotten them beat on Wednesday night it wasn’t as atrocious as the 35% (5-14) that produced. The Sooners still need to improve from the free throw line because there won’t be very many teams in conference to leave as many points at the line as did on Wednesday night.

Another area I’ve been critical in is with turnovers. Perhaps it’s the Coach from the Recliner coming out in me but turnovers are wasted points and it drives me nuts to see them. OU was exceptional at ball protection Wednesday night especially in light of the fact that thrives on forcing turnovers and frustrating opponents. The Sooners only turned the ball over 6 times against the Huskers and the guards were only responsible for two of those. ’s guards combined for 14 assists to only 2 turnovers. That’s a stat I’ll take every night!

Willie Warren entered the game as ’s second leading scorer with 15.5 points per game. Against he only produced 6 points.

may have only scored 6 points but at least it was on 2-3 shooting. Cade Davis was 0-5 from the floor with all of his shots from three point range. Perhaps we should take up a collection to buy him a basket.