Share All sharing options for: All Big 12 Bowl Team: Offense 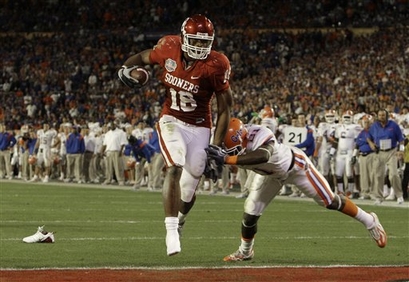 It should go without saying that the Big 12 could have fared better this bowl season but it should also be noted that it could have been much worse had it not been for the North. , and went 3-0 while was the only South school to win giving the conference a combined 4-3 record.

While the offensive performances weren’t as spectacular as they had been during the regular season (lending more credence to the argument that Big 12 defenses were down in 2008) there were some very good individual performances to take note of. Here are my top offensive performers for the conference this bowl season.

Quarterback: Todd Reesing (Kansas) – Kansas had the best offensive production of the Big 12 bowl teams with 42 points and Reesing was the reason. He completed 27 of his 35 passes for 313 yards and 4 touchdowns to only 1 interception.

Running Back: Quentin Castille () - Husker fans may not have been surprised by Castille’s performance but I sure was! Castille carried the ball 18 times for 125 yards.

Receiver: Dezmon Briscow () – Briscoe is my MVP of the bowl season from the Big 12 conference. He was literally unstoppable in the Jayhawks’ game against hauling in 14 passes for 201 yards and 3 touchdowns.

Receiver: Quan Cosby () – Cosby’s 26 yard, game winning, touchdown reception with just 30 seconds left was the most dramatic moment of the Big 12 bowl season. Cosby torched the defense for 171 yards on 14 receptions with 2 scores.

Tight End: Jermaine Gresham () – Capitalizing on being a nightmare to match-up against, caught 8 passes for 62 yards and 2 touchdowns.

Offensive Line: – In addition to paving the way for Castille to run for over 100 yards the Huskers’ line didn’t give up a sack either in their bowl game against Clemson.