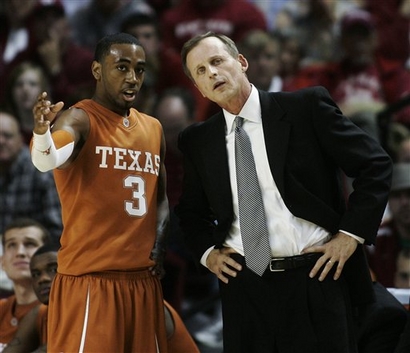 A.J. Abrams to Rick Barnes, “So, what you are saying coach is that the ball is supposed to go through the hoop and not off the side of the glass?" Barnes, “Huh, is that cotton candy over there?”

established dominance Monday night and asserted itself as the frontrunner in the Big 12. In the preview post I said that it had been a while since had equal talent with the Longhorns but after the game I can now say with confidence that OU has better talent than . Kudos to Jeff Capel for bringing the program this far in just his third season!

held to an embarrassing 33% shooting percentage and forced 13 turnovers while having four Sooner players score 15 points or more. At the end of the day Texas, like most schools, had no answer for Blake Griffin as Oklahoma’s big man collected another double-double (20/10), blocked two shots and nailed a three-pointer.

That was the good, now for the bad. OU needs to clean their game up! They turned the ball over 14 times which can get you beat very easily in this conference. The Sooner did improve on their free throw shooting but 66% still isn’t great and just imagine how much more fun this game would have been had they not left those 10 points at the line.

It is a long conference season but is off to a fantastic start! A trip to is up next.