Share All sharing options for: Let’s Meet The Florida Gators! 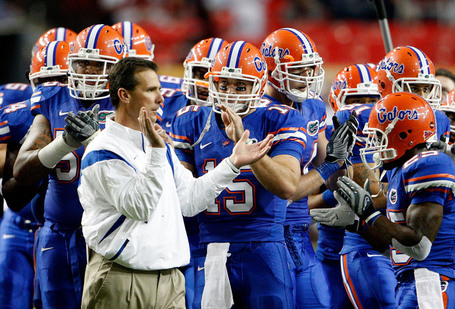 First off you need to check out Alligator Army! That is the SBN site for the Florida Gators. Hopefully we’ll get some things cracking with them over the next month that will help us preview the championship game but don’t wait until then to head over there.

As for the football team that they blog about they have a pretty impressive resume. The Florida Gators have a 12-1 record and are the champions of the Southeastern Conference. They have wins over #16 and #4 . Their offense is 3rd in the country in scoring at 45.2 points per game and their defense is ranked 5th nationally by only giving up a stingy 12.8 points per game.

Those are the stats and here are the men behind them.

Urban Meyer – Meyer is in his 4th season as the Gators head coach. He has compiled a 43-9 record at with a 26-8 record in conference play. He has a 2-1 bowl record at with wins in the Outback Bowl and BCS Championship and a loss in last year’s Capital One Bowl.

QB Tim Tebow – The reigning Heisman Trophy winner has completed nearly 65% of his passes for 2,515 yards and 28 touchdowns to only 2 interceptions. He also has 564 rushing yards for 12 additional touchdowns.

RB Chris Rainey – Rainey leads the Gators in rushing yards with 655. He has 4 rushing touchdowns.

WR Louis Murphy – With so many weapons at his disposal it’s hard to say that Tebow has a go to guy but Murphy could be the closest thing to it. He leads the team in total receptions with 36 and receiving yards at 611 along with 6 touchdown receptions.

RB Percy Harvin – ’s all everything back is fourth on the team in rushing (538 yards, 9 touchdowns) and second in receiving (595 yards, 7 touchdowns).

LB Brandon Spikes – Leads the team in total tackles with 87 and is second in interceptions with 4.

DE Jermaine Cunningham – Has 51 total tackles and is second on the team in tackles for loss with 10 and is also second in sacks with 6.

S Ahmad Black – Has 54 total tackles and leads the team with 6 interceptions.