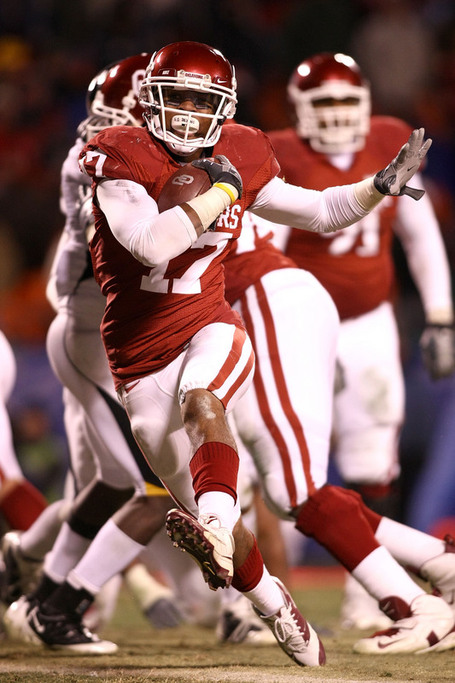 While the whiners whine and the complainers complain the Oklahoma Sooners are celebrating their unprecedented third consecutive Big 12 Championship and the 6th in the last 9 seasons. In leading OU to a 62-21 rout of the 19th ranked Missouri Tigers Sam Bradford became the first Big 12 quarterback to win multiple championships.

An injury to DeMarco Murray on the opening kickoff set up Mossis Madu as an unlikely hero for the night. Carrying ’s load Madu ran for an average of 7.6 yards per carry with 15 attempts for 114 yards and 3 touchdowns. His third score put over the 60 point barrier for the fifth consecutive game making OU the first to accomplish the feat in 89 years.

Joining Madu on the hero’s list are Juaquin Iglesias, the Sooner defense and Sam Bradford. Iglesias had 9 receptions for 126 yards and was on the receiving end of both of ’s touchdown passes.

came into the game averaging 45 points per game which was good enough to rank them 4th in the nation. ’s defense forced Chase Daniel to turn the ball over three times (2 INTs, 1 Fumble) while sacking him three times. was held scoreless in the first quarter and then to just 21 points for the game.

Finally, Sam Bradford was exceptional once again. He completed almost nearly 70% of his passes for 383 yards and two scores capping what has been an exceptional Heisman campaign. Everything worked together for a magical night where the Sooners continue a three year run of being the best team in the conference and became the most prolific offense in the history of college football.

·        became the first team in the history of the Big 12 Conference to win three consecutive conference titles.

·        won their sixth conference championship. No other team in the conference has more than two!

·        became the most prolific scoring offense in the history of college football.

·        DeMarco Murray and Chris Brown became the first running back duo to rush for 1,000 yards each out of the same backfield in the history of the Big 12.