Ha! Even Texas Fans Are Tired Of Hearing From Mack Brown

Share All sharing options for: Ha! Even Texas Fans Are Tired Of Hearing From Mack Brown 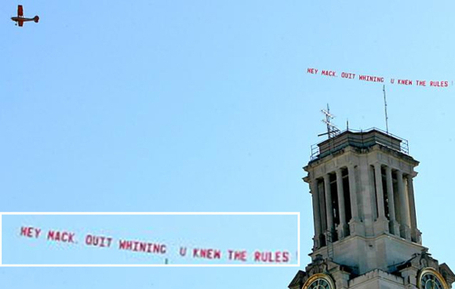 How about that! You thought you were sick of hearing Mack Brown’s whiney voice on all things ESPN try being a person who has to live in the same city as him. The mystery of the banner flown over telling Mack to quit whining is quickly unraveling. At first the stunt was blamed on but then speculation came out that it was Texas Tech fans who actually live in the area. Now the truth is out.

He says the people who hired him are UT fans, but says they specifically asked him not to identify them publicly. He says the entire flight cost about $2,200.

Well, this can only get more interesting from here on out. After having fans gripe at us for a week now they can start griping at each other. I don’t know about you but I have a huge smile on my face because it looks like it isn't just OU fans and the conference coaches who are tired of his complaining about a system that he knew was in place. Let’s just sit back and watch this whole thing blow up!