Give Arkansas Credit And Then Blame Yourselves

Share All sharing options for: Give Arkansas Credit And Then Blame Yourselves 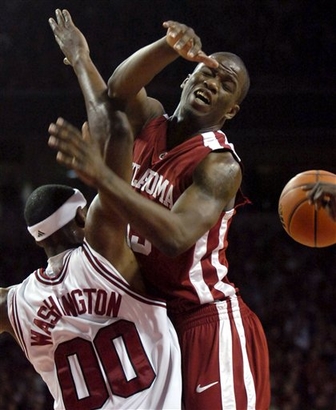 Warren's play was the only bright spot of the first half.

Let’s see, you lose a game by 8 points but left 11 points at the free throw line. It shouldn’t be very hard to figure out what went wrong for Tuesday night resulting in their 96-88 loss at . The Sooners were humbled in by getting beat at their own game. The Razorbacks forced their way to the free throw line 43 times and why they weren’t the best from the charity stripe converting just over 69% of those attempts gave the Hogs a 30 point boost. also won the battle of the boards 42-29 and relied on their big man to lead the team by collecting a double-double while getting support from the guards.

’s problems went well beyond poor free throw shooting though. How about the inability to get a rebound for starters? Blake Griffin had a game high 13 boards but no other player on the team recorded more than five while had five players with 5 or more rebounds.

Then there was the issue of turnovers. For all that he’s been to this team Blake Griffin simply cannot afford to turn the ball over 4 times a game, especially when his teammates are going to add another 7. If you figure that the Sooners score just two points on half of those trips down the floor that resulted in turnovers then you’ll find an additional 10 points to put on the score board.

Finally, OU got off to a start that was so poor you couldn’t help but wonder if they had even hit the gym at all over the Christmas break. Willie Warren was the only player who really showed up in the first half and as marvelous as he was he couldn’t carry the team by himself. He showed again that he’ll be a star for this team but 20 first half points barely dented the 53 put up by the Hogs.

The basketball season is long and tedious and this surely won’t be the only loss of the season for but what they have to do is gain experience, learn and move on from here. Shooting 50% from the free throw line isn’t going to cut it on most nights in the Big 12 especially when you are getting killed on the boards. Its time for the Sooners to live and learn, up next is on Saturday. I would expect for them to release a lot of aggression and frustration.