Share All sharing options for: Sooners Overcome Rice/Elements For 70-58 Win 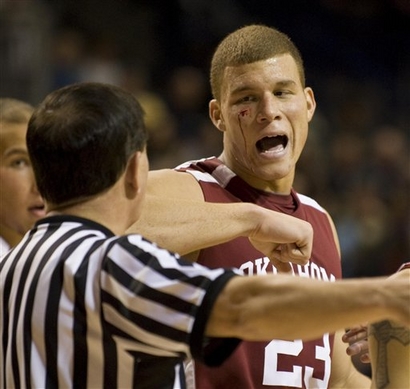 Blake Griffin and the rest of the Sooner Nation wanted to know why a foul wasn't called here.

Apparently the economy is worse off than I thought because working clocks don’t fit into a $23 million budget anymore. That’s how much money Rice just spent to renovate their basketball facility and instead of purchasing the Crown Jewel of Conference they instead bought the embarrassment of the state of . There are Wal-Mart brand digital alarm clocks in trailer parks east of that work with better efficiency than the "state of the art clocks in the Tudor Fieldhouse.

Of the things Oklahoma had to overcome Monday night in Houston were repeated 17 turnovers (season high), 5-20 shooting from beyond the three-point line (25%), 50% shooting from the free throw line (17-34) and a game clock that seemed to malfunction on just about every other Oklahoma possession causing a stoppage in play and forcing the Sooners to play much of the game in a slower pace half court offense that clearly benefited the Rice Owls.

Regardless of the circumstances Willie Warren scored a career high 31 points to help prevail 70-58. only had 6 players score in the game and only Blake Griffin and Warren scored in double figures. No one else had more than 4 points.

’s career night included making 11 of his 17 shots from the floor (4-9 from 3 point range) in 37 minutes of play. He was complimented by Blake Griffin who recorded another double-double while taking a physical beating just about every time he touched the ball. Playing with a cut under his right eye from an elbow Blake Griffin scored 27 points and grabbed 11 rebounds.

There was plenty to be concerned with ’s performance on Monday night. Free throw shooting was atrocious as was three point shooting. There is no excuse for 17 turnovers against a team like Rice either. I’m going to give some of the credit for OU’s poor performance to playing their first true road game of the season and some more to the crazy issues to the game clock but what cannot be explained by either of those is the free throw shooting. The building was half empty so there was no one standing behind the goals to distract shooters. I’m going to attribute it to complete lack of focus which as stated above is completely unacceptable. It could have cost this basketball game and will cost the Sooners in conference play if not taken care of.