Sooner Guards Pave The Way To Victory Over VCU

Share All sharing options for: Sooner Guards Pave The Way To Victory Over VCU 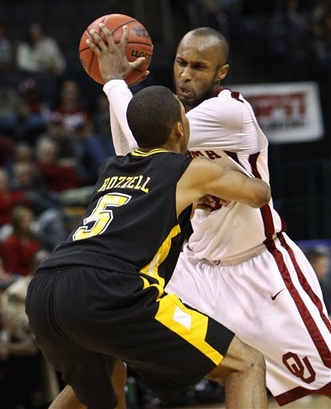 Tony Crocker put on his mean face and the exploded for 26 points against VCU!

Thanks largely to a spectacular performance by Tony Crocker ’s guards lifted the Sooners to a 81-70 win over Jeff Capel’s former team. OU only had two players to score in double figures and in one of the rare occasions the leading scorer was not Blake Griffin. Blake got his points though. He went 5-8 from the floor and finished with 18 points but the story of the night was not the big man it was the ball handlers.

Of Oklahoma’s 81 points 30 of them from beyond the three-point line where the Sooner guards shot 62%. Obviously when things are clicking outside they’ll also run a lot smoother inside and vice versa. showed the kind of inside/outside game that should make opposing coaches tremble and Tony Crocker was the key component to making it work. He scored a team high 26 points and was deadly from beyond the arch going 5-6.

Crocker gets the glory of having scored the most points but his fellow guards kept the pace as well. Willie Warren was 2-3 from beyond the three-point line and Austin Johnson was 1-2. The only guard not to shoot 50% or better from beyond the arch was Cade Davis who was 2-5.

OU is off to their best start since the `89-90 season and the only real criticism that I have of the team in this game was the 13 turnovers. It seemed that the majority of them came in final 10 minutes of the game when it appeared that the Sooners lost focus after building a 20 point lead. I realize that some of that was garbage time but I hate to see a team fall asleep on the job.