Share All sharing options for: Sooner Men & Women Victorious Over The Weekend 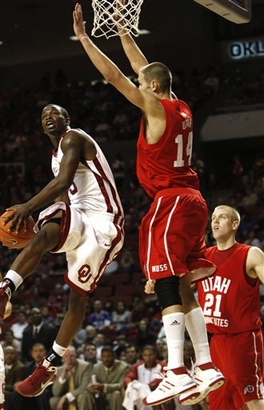 If you were to tell me that Blake Griffin wouldn’t score from the floor on Saturday afternoon against then I would respond with, "Then the Sooners will lose!" Well, the Utes somehow managed to hold ’s super star to just three attempts from the floor to which he went 0-3.

Blake Griffin was limited to just 23 minutes because of foul trouble and despite not scoring from the floor he still managed a double-double by collecting 11 rebounds and converting 11 of his 14 free throw attempts. With Blake Griffin on the bench had to find a new scoring threat and they turned to the senior leadership of guard Austin Johnson. Johnson scored 14 points, to lead the team, on 5-6 shooting from the floor. Coupled along with freshman Willie Warren’s 12 points and Tony Crocker’s 11 the Sooner guards paved the way to a 70-52 victory. 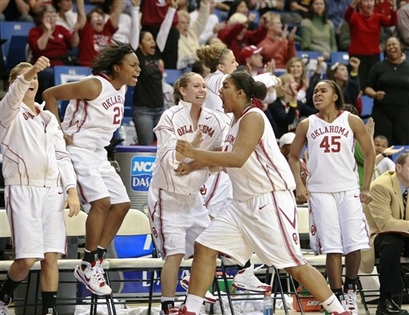 Down 52-26 the Sooner Women had Cal right where they wanted them.

The women couldn’t have gotten off to a worse start in their game with . The Lady Sooners trailed #9 52-26 at the half but would close the game on a 34-6 run to cap an improbable 86-75 comeback win.