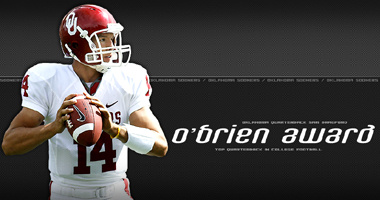 Sam Bradford has had the most productive season ever for an quarterback and was rewarded Thursday night with the Davey O’Brien Award. The award is given annually to the nation’s top quarterback and has certainly earned that reputation this season. He broke Jason White’s record for touchdowns in a season with 48 and also set the career mark for passing touchdowns at OU with 84.

Before you jump to the conclusion that this gives ’s Heisman finalists a leg up on the competition for Saturday night it should be noted that ’s Tim Tebow won the Maxwell Award and Colt McCoy took home the Walter Camp award. That tells me that all things are pretty equal the final tally Saturday night is going to be very close.