Florida’s Offense By The Numbers

Share All sharing options for: Florida’s Offense By The Numbers 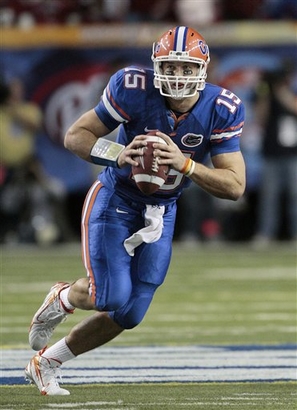 There’s good news and bad news for when it comes to facing the Florida Gator’s offense. First, the bad news is that the Sooners haven’t faced a team this season with the type of offensive success that the Gators have had. is 3rd in the nation, behind and , in points scored per game at 45.2. We can break it down anyway that we’d like but it doesn’t change the fact that is the most dominant team in the country when it comes to both offensive and defensive stats.

Now on to the good news. runs the spread offense and while the Sooners haven’t played them they have played the 4th, 5th and 6th ranked offenses and they are all separated from ’s scoring average by 2 points or less and run the same offenses. If there ever was a prep class for facing the spread offense it is playing in the Big 12 conference where just about every opponent runs the spread.

There has been a lot of scrutiny in regards to ’s defense. The Sooners are giving up an average 24.5 points per game leaving most of the Gator Nation (and a good portion of the Sooner Nation as well) wondering how in the world they are going to stop Tim Tebow and company. Fact is, has already played against 7 of the nation’s top 25 scoring offenses and has faired pretty well.

Please don’t get me wrong. I’m not saying that the Sooners will stop the Gators with relative ease but just bringing up the point that there isn’t much more that can bring to the table that hasn’t already seen. My opinion of the Gators is that they are equivalent to a or offense with better athletes. As with those teams OU must play for stops and not necessarily a shutout. The Sooners must simply limit them because the Gators are going to score. They have a proven track record of it.

I have a lot of faith in ’s offense just because I have yet to see a team stop them. In my mind the worst case scenario for Sam Bradford and company is 35 points so if the Sooner defense can hold the Gators to between 28-31 points I believe national championship number 8 is on the way. Should the Gators be able to push the point total beyond that then trouble is brewing.

We still have plenty of time to discuss game plans but initially it appears that needs to follow the same game plans they used for and . They need to stop the run, account for Percy Harvin and contain Tim Tebow. Obviously it is easier said than done but there is a way and we’ll discuss it in future posts.