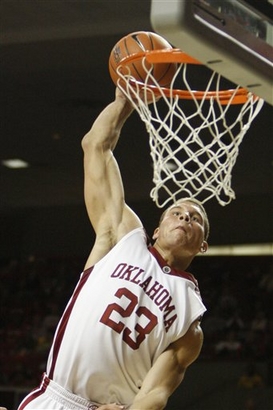 Going into this game we were pretty certain that wouldn’t present a struggle for the Sooners and it turns out that we were right. Like most teams that has played this year the Black Bears had no answer for Blake Griffin. ’s super sophomore logged another double-double with 22 points and 10 rebounds in leading the Sooners to a 78-52 win.

“We knew we had our work cut out coming in here,” coach Ted Woodward said. “They have a tremendous player in Blake Griffin. We were a little bit physically overmatched.”

Of Blake Griffin’s 22 points 14 of them came on dunks resulting in his 11-13 shooting performance from the floor. Willie Warren was ’s second leading scorer with 19 points.

It really wasn’t an issue Wednesday night because had such a huge advantage inside but the Sooners only shot 25% from beyond the three point line. That percentage has got to increase or the Sooners will be in trouble when conference play comes around. Being able to hit from the outside keeps things soft on the inside allowing the brothers to do their damage. When opponents don’t respect the perimeter game they’ll make life difficult inside for the big men.