Defensive Keys To Victory Against O-State

Share All sharing options for: Defensive Keys To Victory Against O-State 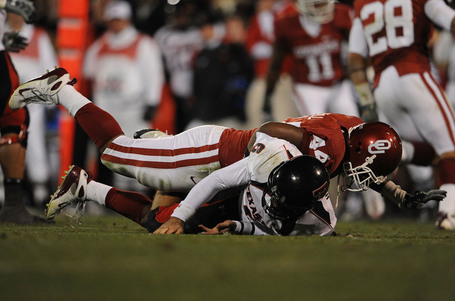 Oklahoma needs to get the same pressure on Robinson that they did Harrell.

should be able to follow the same defensive game plan against as they did against Texas Tech. Last Saturday night in the Sooners held the nation’s top ranked passing attack to just 21 points by stifling the Red Raiders rushing attack and putting constant pressure on the quarterback. If OU can do the same against the Cowboys tonight then the Sooners will walk out of with a comfortable win.

However, it won’t come as easy this week! Last week’s performance was sparked by an insane crowd and in the Sooners will be working against the crowd. OSU also brings the Big 12’s top rushing attack to the table which means that the Sooners defensive line won’t be able to pin their ears back and bum rush the quarterback every down. Instead they’ll have to play the run! Nonetheless there is a map to success for OU.

Pressure Zac Robinson! He is a lot more mobile than Graham Harrell is so it will be on the defensive ends to keep containment on him. Robinson has a tendency to flush from the pocket early when he is under constant pressure. That usually results in throwing the ball away or a short scramble.

Success won’t necessarily be defined by sacks (although the more the merrier) but by quarterback knockdowns and pressures. Flush Robinson from the pocket and pressure him every time he drops back and he’ll panic. Look at the game for an example of this.

Tackle – OU did an outstanding job at not allowing Texas Tech very many yards after contact. The first defender has to make the tackle! If he misses or allows or allows the runner to escape then short gains turn into long ones.

Texas Tech attacked the Sooner defense with Michael Crabtree and OSU will use Dez Bryant. Bryant is averaging 18 yards per reception and has the speed to burn a defense on a deep ball and the toughness to come across the middle. Like they did with Crabtree last week the Sooners must always account for Bryant when they are on defense and bring him down the very second he touches the football.

Make O-State One Dimensional – Here’s where it gets difficult. The Cowboys rushing attack, led by Kendall Hunter’s 6.8 yards per carry, accounts for 261.3 yards per game. The pressure is on the Sooner linebackers to limit his yards. If OU can force to 2nd and 3rd and long then the advantage switches back to the Sooners pass rush.

Hunter gets the ball 20 times a game. If they can hold him to around 3 yards per carry then that would force the Cowboys to rely more on the passing game then they would like to. Win the battle on first down and turn 2nd and 3rd downs into passing downs and the Cowboys will be one dimensional.

Force Turnovers – Zac Robinson has thrown seven interceptions this season and the defense has made a killing on turnovers. They don’t need a whole lot but two or three extra possessions due to OSU turnovers should put the game out of reach and secure a comfortable Sooner win.

With ’s #11 ranking in the AP this is the biggest Bedlam football game since the 2003 season. That year the Cowboys demanded respect and forced to recognize them as one of their rivals. gave them their full attention and thrashed the Pokes 52-9. Hopefully we’ll see the trend of close games in come to an end this year.