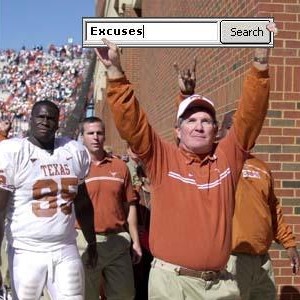 As expected, gave Texas A&M a beat down on Thanksgiving and while the Longhorns are patting themselves on the back for their 40 point thrashing (We won’t post a score because the Longhorns are only focused on one score) of the Aggies let me throw out a little reality. A&M Ranks last in the conference in scoring defense as well as in rushing defense. They are also last in the Big 12 in rushing offense and 11th in scoring offense and total offensive yards per game. Of course those stats are going to be lost by the hype machine along with the 39-33 score. What we are going to hear instead is how dominating the performance was and how the Longhorns looked like a championship team. The Longhorns are a championship caliber team but 4-7 Baylor looked good against them as well.

It’s a sad position to be in but the Sooners still need help. They got absolutely nothing from Texas A&M but could benefit from a win over in addition to the aforementioned help from the Red Raiders.

Because of the margin of the Longhorns victory over A&M Oklahoma can’t just simply beat anymore. I am fully confident that Mack Brown is going to lobby for and be granted air time during the Bedlam game which means that must drown out his message with their play on the field. That means style points are going to come in to play once again. needs to win and win comfortably.

’s 40-31 win over gives them an 8-4 record for the season and could find them ranked in the Top 25 by the coaches. Either way it helps OU’s cause in the computers.

19, 15 – This guarantees that will win the Big East regardless of what happens with their game against . Obviously a Bearcats victory only bolsters ’s cause but the fact remains that the Sooners have a blowout win over the Big East Champions.

at Rice – We need to be Cougars fans because a trip to the Conference USA Championship Game is on the line. owns a victory over Rice and an Owls win could wind up giving the Longhorns a victory over a conference champion as well.

at – A Seminoles win here would really complicate things in the BCS.

at – Again the BCS could become a real mess with a Tigers win.