Offensive Keys To Victory Against O-State

Share All sharing options for: Offensive Keys To Victory Against O-State 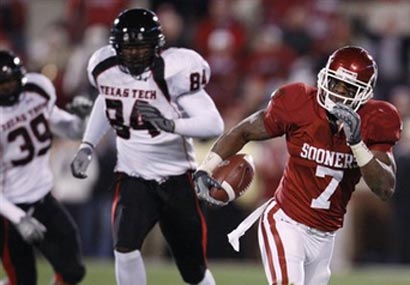 DeMarco needs to have another game like we've seen from him the last month.

’s offense has yet to be stopped this year and they are learning to pace themselves. OU has the most balanced attack in the conference and the most lethal in the country. Against on Saturday they’ll have to remain balanced in order to neutralize ’s attack. We’ll get into the Pokes offense on the next post but let me just say that they’ll pose more of a threat than Texas Tech did because of balance.

is 4th in the conference in points allowed at 23.8 and they are allowing almost 102 yards per game on the ground while giving up 259 through the air. For to come out of with a victory the Sooners must be able to do the following things on offense.

There isn’t an offense like ’s in the Big 12 but I don’t believe that the Sooners can afford to get into a shootout with OSU. The Sooners need to maintain a balanced attack to both run the clock and the Cowboys into the ground.