is in prime position to vault themselves into the Big 12 Championship game and then on to . All of the ingredients are in place with the only thing left to be added is a Sooner victory Saturday night in . The eyes of may be on the Longhorns but the eyes of the nation are on the Sooners. First it was the announcement that ESPN’s Game Day would be there. Then it ABC announced that it would be the Prime Time game. Now if you pick up this week’s copy of Sports Illustrated guess who is on the cover? 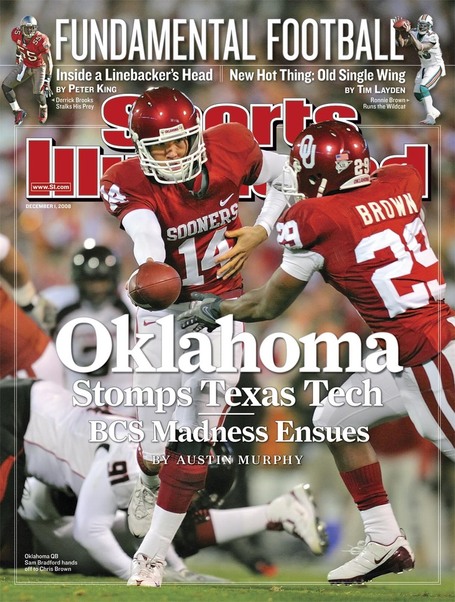 Unless you are a firm believer in the SI Jinx this is a very good thing for the Sooners. Having a cover story in Sports Illustrated is the same in the print world as Game Day is to the televised world. It raises eyebrows and causes people to pay attention. In his article, SI’s Austin Murphy points out the magnitude of OU’s win over Texas Tech and the implications it will have on the BCS race.

Called out by their supreme leader, Sooners fans in the crowd of 85,646 made their presence felt from the get-go at Owen Field last Saturday night. Some, in fact, couldn't wait for the opening kickoff. There was the wheelchair-bound gentleman screaming over the railing during pregame warmups at Tech defensive coordinator Ruffin McNeill.

It was ungracious. It was inhospitable. It was undeniably accurate.

Two traits had transformed Tech this season from an entertaining, second-tier team to a bona fide national-title contender. The Red Raiders had run the ball effectively and played decent defense. Both ingredients went AWOL at OU. Tech could scrounge just 45 yards on the ground. Starting with their second play from scrimmage—an 18-yard dash by DeMarco Murray—the Sooners ran the ball down Tech's throat, which opened up their passing game, which resulted in touchdowns on six of their first seven possessions.

took whatever it wanted from Texas Tech. The guy in the wheelchair was right. The visitors were not ready.

NOR IS America ready, one fears, for the round of recriminations and bellyaching about to break out in the Big 12 South, whose top three teams—Oklahoma, Texas and Texas Tech—now have identical conference (6--1) and overall (10--1) records. Who will play in the Big 12 title game on Dec. 6 in (page 36)? If the three win this week (all will be favored), the spot goes to the team that is ranked highest in the BCS standings on Nov. 30.

There are so many factors that go into the BCS standing that it is inexplicitly inexplicable. The x-factor is the human votes. Even though no one understands the computers they are unbiased and not swayed by human opinion. However, the Coaches and Harris Polls are. Win the big game and you can earn extra points that come in the form of votes. The national media has done everything in their power to establish Bedlam as the biggest game of the week. Now all has to do is go out and win it.

I believe that a win in Saturday night in comparison to a win at home over A&M and the Red Raiders win over Baylor in will give OU the percentage points needed to jump the Longhorns in the BCS standings. They are already ahead of the Longhorns in the polls now so they are playing to preserve votes and not necessarily gain them. It is percentage points that they need to gain and OSU’s #12 ranking is just what the Sooners need.