Was Saturday Night’s Crowd The Best Ever At Memorial Stadium?

Share All sharing options for: Was Saturday Night’s Crowd The Best Ever At Memorial Stadium? 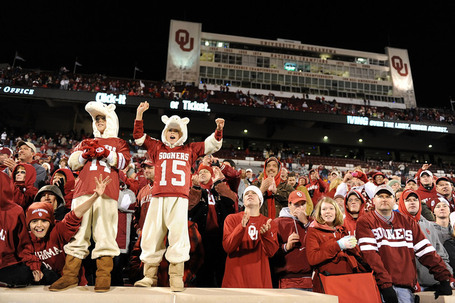 "I think maybe just our overall focus and play are the biggest reasons, I don't think we've ever been known to have an overly ruckus crowd." – Bob Stoops on Monday before the Tech Game

I’ve been attending football games since 1985 and I can honestly say that I don’t remember having ever seen a home crowd like the one we had Saturday nigh for the Texas Tech game. Bob Stoops threw down the gauntlet earlier in the week and the fans rose to the challenge.

The crowd of 86,646 (a record at crowd at OU) came early, stayed late and made constant noise. There is no way you’ll ever convince me that the Red Raiders weren’t rattled. Don’t believe me? Check out the looks on Mike Leach’s and Graham Harrell’s faces when the crowd took a moment to “Jump Around."
That may go down as my greatest Sooner moment, ever! I don’t think I’ve ever had more fun at a Sooner home game.