Share All sharing options for: Defensive Keys To Victory Against Texas Tech 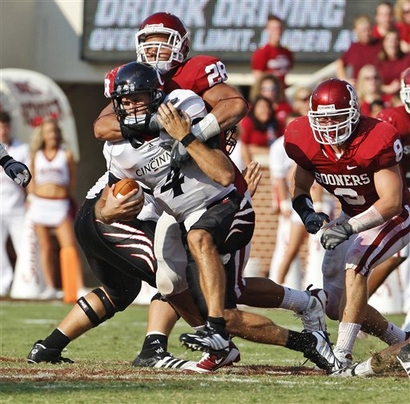 Sure Tackling Is A Must Against Texas Tech

How do you stop a passing attack that averages 433 yards and almost four touchdowns per game? Simple answer: You don’t! The best thing can do against Texas Tech tonight is try to limit them in what they can do. The Red Raiders are going to score and while it is on the offense to match Tech’s points the defense has to make sure that Graham Harrell and company don’t score every time they touch the football.

Against Texas Harrell threw a last second touchdown for a come from behind victory over the nation’s top ranked team. Against the Red Raiders scored on seven consecutive drives to put the game away. You cant nap on this offense and you certainly cant take any plays off against them. The minute you do they burn you for an unexpected score. The question isn’t, how do you stop them? Rather, how do you keep them from beating you? Here’s how I would answer it.

Make Graham Harrell Go Through His Progressions! If Harrell is able to consistently hook up with his #1 and #2 options then the defense is going to be in for a long night. ’s secondary has to cover well enough to make Harrell look for a third or even a fourth option. When that happens he’ll be forced to move from the pocket and maybe even throw an ill advised pass. The point is that the secondary must cover in order for the defensive front to disrupt the passing attack.

Tackle – The problem with a quick strike passing attack is that it usually relies on short passes. That becomes less of an issue when you have receivers who are capable of shaking down a defender and turning a short pass into a homerun ball. must wrap up the receivers the minute they get the ball and not allow any yards after catch.

Make Tech One Dimensional – What do you mean that you thought that they already were one dimensional? Texas Tech is running the ball at an average of 5.2 yards per carry. They aren’t next to last is the conference in rushing yards because they can’t run but because they choose not to. No team in the Big 12 has attempted to run the ball less than the Red Raiders. ’s defensive line and linebackers have to make sure that when Tech does try to run that it is for minimal yardage.

Force Turnovers – Graham Harrell has only thrown five interceptions this season but the Sooners will need to take some risks and jump routes as well as force some bad passes as well as a strip every now and then. Win the turnover battle, win the game!