Share All sharing options for: Offensive Keys To Victory Against Texas Tech 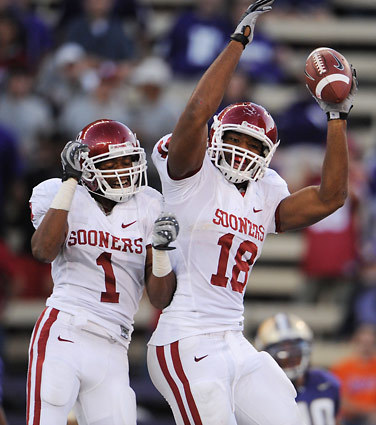 fans should be prepared for a Texas Tech team like they’ve never seen before. Typically they come to with a high powered offense but also with a defense that would allow just about as many points as their offense would score. That isn’t the case this year as we’ve already seen the Red Raiders limit the explosive offenses of and . Obviously the goal of any football game is to score more points than your opponents so there are some specific things that the Sooners need to do to gain victory over the Big 12’s first place team.

Run The Ball – We need to be realistic about the fact that both offenses have the potential to score at will and ball control is crucial. Texas Tech is only allowing opposing offenses 3.4 yards per rush so the Sooners will have to beat the average but I stand by my opinion that ball control is the way to beat the Red Raiders.

Protect The Quarterback – Give Sam Bradford some time and he’ll have a banner night. That’s what we’ve witnessed all season long and hopefully what we’ll see Saturday night. Texas Tech brings the Big 12’s sack leader to in Defensive End McKinner Dixon. Bradford is going to feel some pressure but Phil Loadholt is going to have to the match-up against and it may be the most crucial position battle of the night.

Don’t Kill Drives – This is a game where every possession counts. OU can’t afford to help out the Red Raider defense by negating plays with penalties and ending drives prematurely with turnovers.

Take Advantage Of Every – As much as I love Jermaine Gresham he has been guilty of missing blocks and dropping an occasional touchdown pass. That can’t happen against Tech! Not just with but with the entire set of receivers and ends. They have to capitalize every time finds them.

This is also the game where a missed extra point or field goal will cost the game. Every opportunity to score points must be capitalized on.