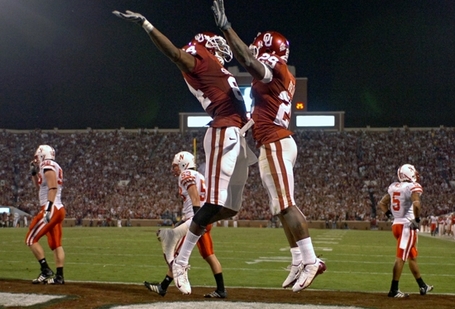 I knew that there was potential there for to win this game in a blowout but to be honest with you I really didn’t expect it. took their opening drive 53 yards and then took advantage of three turnovers on their next five plays to jump to a 28-0 lead with nine-and-a-half minutes still left in the first quarter. added another touchdown later in the quarter to push the lead to 35-0 and then Bob Stoops pushed the cruise control button. The final result was a 62-28 OU victory with seven of ’s points coming in garbage time.

Sam Bradford threw for 309 yards and 5 touchdowns but did have a pick.

Quentin Chaney was ’s leading receiver with 127 yards and a score on 5 receptions.

Travis Lewis led the team in tackles with 9 after suffering the loss of his infant daughter on Monday.

Frank Alexander registered ’s only sack of the night. It was an 8 yard loss.