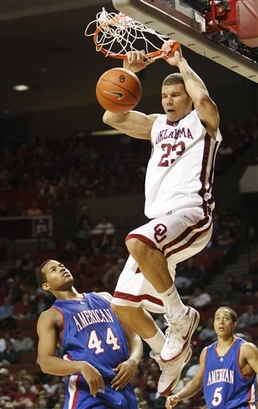 forward Blake Griffin shot 9-11 from the floor including a perfect swish on his only three point attempt of the night which was his first trey of the year. In the end he would leave the floor with 24 points and 18 rebounds for his 11th career double-double of the season to lead the Sooners to a 83-54 win over American.

In addition to , guards Cade Davis and Willie Warren reached double figures in scoring with 11 and 10 points respectively. struggled from the floor though making only 3 of 9 shots and was 0-4 from beyond the arch. I’ll give him a pass because it was his first regular season game but he’ll need to pick up the pace for to win the Big 12.

starts the pre-season NIT Monday night when they host in the .