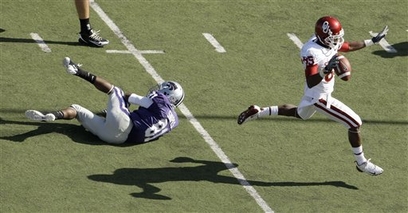 The game was over at the half but unfortunately the final 30 minutes had to be played, and it was an ugly 30 minutes of football. Josh Freeman put up big numbers for the Wildcats (478 passing yards, 3 touchdowns) but also turned the ball over three times.

’s defense did just enough to get by today and the Sooners used a 55 point first half to build an insurmountable lead. Chris Brown and DeMarco Murray rushed for 137 and 104 yards respectively. Brown reached the endzone once and twice. also added 63 yards and two touchdowns receiving.

Defensively, I was a lackluster performance at best but I’m giving Travis Lewis my defensive player of the game award. More to come later but for now enjoy the win and the rest of the afternoon games.