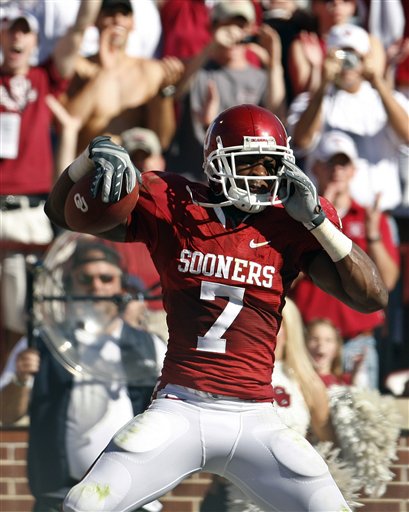 Bob Stoops improves to 10-0 in the game that follows the Red River Shootout as Sam Bradford throws for a school record 486 yards and the Sooners roll 45-31.

With linebacker Ryan Reynolds out, Coach Stoops moved Nic Harris to middle linebacker and Quinton Carter got his first start at Safety, but this game was all about offense. Here are some numbers from both teams:

Oklahoma was able to play ball control with a time of possession of 34:13 and 206 yards on the ground, but they were also able to strike quick with the pass as they have all season.

One bad thing about the game was the loss of Manny Johnson early in the 1st quarter with an apparent elbow injury. X-Ray's were negative but Johnson did not return. Thankfully, Quentin Chaney stepped up, as he has in the past two Fiesta Bowls, with 6 catches for 105 yards.

Now that we seem to have our run attack back on track, it is time to  turn our attention to our second true road game against Josh Freeman and the Kansas St. Wildcats.