Share All sharing options for: Kansas vs. Oklahoma: Offensive Advantage 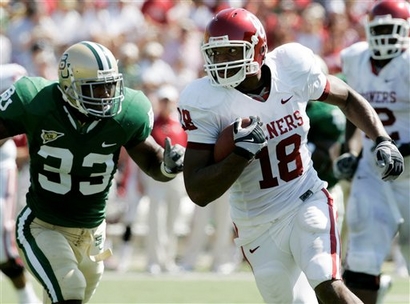 The future of Oklahoma’s offense meets its past this Saturday on Owen field. Mark Mangino returns to Norman guiding the 16th ranked, 5-1, Kansas Jayhawks. Mangino has led Kansas to BCS greatness and has brought the program to where they are competing for Big 12 championships. Kansas isn’t just a basketball school anymore but how do the Fighting Mangino’s stack up against the Sooners on offense?

I’ll take Sam Bradford over any other quarterback in the conference but I have said more than once that if we had to trade QBs with another school then I’d take "The Reesing." He is a gritty leader who shows lots of poise and has very good accuracy. Not quite Sam Bradford but definitely a guy who I wouldn’t mind having on my team.

Kansas is just behind Oklahoma in the conference in passing. The Jayhawks actually average more pass attempts and completions per game than the Sooners but are behind in yards per game by around 30 and have 9 less passing touchdowns than OU.

I don’t think anyone is going to stand up and proclaim the greatness of either of these rushing attacks. The truth is that there has been frustration on both sides and that they both should be better. However, the same is also true for both schools that when you stop one aspect of the offense you will struggle against the other. Hence the good passing numbers on both sides.

Kansas is eleventh in the conference total rushing yards and yards per game. Oklahoma has struggled moving the ball on the ground against two of their six opponents. Those two (TCU, Texas) were also most likely the two strongest defenses against the run that the Sooners will see this year. For all their struggles they are still 5th in the conference which makes them better than 7 schools, including Kansas.

Kansas seems to be every bit as deep as Oklahoma at the receiver position. They have four solid options not including their backs which are used frequently as well. Oklahoma in turn has four legitimate threats plus backs to counter. You find that these two units are the key components of the offenses and provide nearly the same level of production.

We say every week that the key to every offense is the line. Looking at the numbers we see that Oklahoma’s offensive line is very similar to the Jayhawks, so much so that there really isn’t a decided advantage. Both defensive units will have their hands full trying to penetrate these lines and disrupt the backfield.

With the receivers and lines being even Oklahoma is going to have to win this game on the legs of the running backs and the arm of Sam Bradford. Both schools have plenty of offensive firepower so it is important that the Sooners are able to establish a running game and work the clock. I know that sounds crazy when you consider OU’s quick strike offense but I really don’t think that the Sooners want to get into another shootout like we saw last week in Dallas.