Oklahoma Drops A Tough One Against Texas 45-35

Share All sharing options for: Oklahoma Drops A Tough One Against Texas 45-35 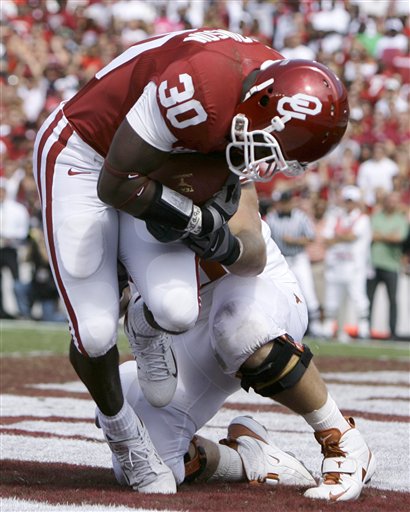 Well that was depressing.

In a game with many ups and down both ways, it was Texas who ended the game with the highest up, winning 45-35.

Sam Bradford played a great game but Texas was able to get pressure on Bradford when it counted to get the stops they needed in the 4th quarter and sealed the game with two late scores.

And not to sound like one of those guys who blames the refs for blowing calls, because these refs were bad both ways, but the interception by Lamont Robinson that wasn't, and allowed Texas to get 3 points and take the lead for the first time was a big momentum killer.

Texas was the better team today and they physically beat us down in the trenches late in the 4th quarter and they got the stops when they had to, and that was the difference in the game.

So congratulations to Texas, they earned it. Hopefully we both win out the rest of the season and see each other again in the National Championship game to get another shot at them, but today was their day.